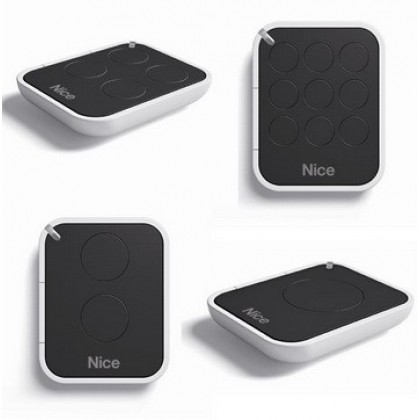 The Era One uses data processing and recognition systems that increase its degree of security and deliver a threefold reduction in automation response times.

Easy memorisation, even at a distance, thanks to Opera receivers.

There are two options for enabling a new Era One transmitter, even at a distance from the system:

• using a transmitter already programmed in the receiver, thanks to the enabling code exchange between the two (figure 1);

• using the Nice O-Box connection interface; the receiver’s certificate is entered by just placing the new Era One next to the O-Box and following the described procedure on a PC or PDA (figure 2). Safe, if a transmitter is stolen or lost, with the O-Box the user can:

• replace it, maintaining the same functions as in the previous one;

• disable the old transmitter by increasing the priority level on the new Era One.

Extremely practical: using the O-Box software, the Era OneC version allows whole packs of 10 devices to be programmed in a single procedure, without even opening them! Elegant and convenient: the Era One transmitter can be used as a stylish, high-tech keyring or fixed to the wall or your car’s dashboard with the handy support included in the pack.

Nice Go mini cover for NiceWay transmitters
NiceWay Mini cover, Go can be hung anywhere and can also be used as a key-ring thanks to the tie tha..
£6.91 Ex VAT £8.29 Inc VAT
Add to Cart
Add to Wish List
Compare this Product

Nice TOONA7024-DKIT 24Vdc linear screw kit for swing gates up to 7m
New third generation models: quality and durability thanks to the housing, made up of two tough alum..
£2,338.20 Ex VAT £2,805.84 Inc VAT
Add to Cart
Add to Wish List
Compare this Product

Nice HoppKit1 24Vdc articulated arm kit for swing gates up to 2.4m
Easy to install thanks to a new fixing bracket with quick connector for the motor.Two irreversib..
£1,336.73 Ex VAT £1,604.08 Inc VAT
Add to Cart
Add to Wish List
Compare this Product

Nice L-Fab Kit 230Vac underground kit for swing gates up to 4m - DISCONTINUED
We’re sorry but this product is no longer available. We have listed suitable alternatives below unde..
£1,116.17 Ex VAT £1,339.40 Inc VAT
Add to Cart
Add to Wish List
Compare this Product