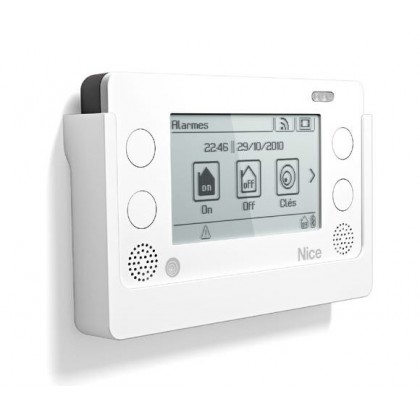 The wireless Nice Era touchscreen can mage all home automations, the remote control of:

By using Nice TT2L or TT2D miniaturised control units and/or universal receivers, you can manage light, irrigation and heating.

Automations, groups and scenarios can be controlled in time bands thanks to built-in weekly and hourly programmer. Simple programming, configuration and control of the alarm system, with an intuitive graphic display, built-in vocal guide, and bidirectional technology.

Built-in proximity transponder badge reader for the management of alarm system: each individual key can be personalised for the single user and individual zones.

Thanks to the bidirectional wireless communication with the alarm system, the touchscreen displays alarm system status, indicating the status of each individual zone by means of simple icons.

* A handy wall holder can be purchased separately.

Nice Go mini cover for NiceWay transmitters
NiceWay Mini cover, Go can be hung anywhere and can also be used as a key-ring thanks to the tie tha..
£6.18 Ex VAT £7.42 Inc VAT
Add to Cart
Add to Wish List
Compare this Product