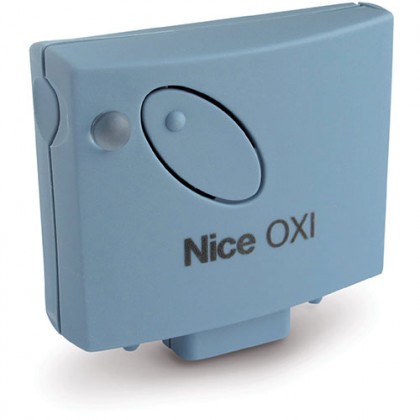 The complete range of multicode receivers with management of Identity Codes and Certificates.

433.92 MHz, with connector, with and without built-in transmitter.

Each receiver in the series One has its own secret identification number known as a Certificate to distinguish it from all others. The certificate can also be programmed on the transmitter in the One range which uses it as an enable code to interact with the receiver.

Practical and funtional: the built-in transmitter of the receiver OXIT enables bi-directinal communication with the multi-functional O-Box interface; enables operations such as downloas of radio codes, management of certificates and passwords directly on the receiver, also when located in positions difficult to access.

Internal transmitter: the receiver OXIT can be used as signal repeaters to increase the operating distance between transmitters and other possible receivers in the One series.

Multicode: receivers in the One series are compatible with the transmitters with encoding system O-code One at 868.46 MHz and at 433.92 MHz and Smilo, Flo, FloR, TTS (only for One at 433.92 MHz) for multi-group transmission, which enables the delivery of multiple commands simultaneously from a single transmitter.